Today was the second time I have had the honor of concelebrating a Mass with Pope Francis presiding – the first was at World Youth Day in Rio de Janeiro, Brazil, in 2013. Today, it was in a city that is near and dear to me – my college city, in my own country: Philadelphia. Participating in any event with the Holy Father is amazing and memorable – and these days, I find just as much, if not more, joy in being able to witness other people have encounters with the Pope, often for the first time. Our pilgrim group was blessed with some great encounters, and I know that I have not yet heard them all. But here’s my story. First … a picture … my view for the Mass. 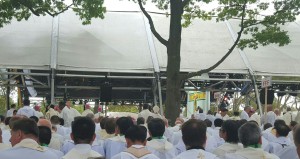 I left our hotel about 8:00 Sunday morning with Msgr. Bill Stumpf and Deacon Pat Bower from the Archdiocese of Indianapolis. We walked through still fairly empty streets to reach a security checkpoint, then continued walking along the Benjamin Franklin Parkway to reach the Philadelphia Museum of Art, where clergy would be vesting for the 4:00 pm Mass. Our journey was smooth and uneventful, and we arrived at the museum by 9:05. They had coffee and pastries for us, and then a great gift – the opportunity to walk through the museum’s art galleries while we waited for lunch and the actual preparations for Mass. The museum even had a number of their tour guides stationed in various galleries, and we enjoyed the opportunity to see and learn about some fantastic works of art, including perhaps my favorite painting of all time – Henry Ossawa Tanner’s Annunciation. Then, we ate lunch, vested, and got in line with the 1,500 or so other priests to prepare for Mass.

We were taken to our seating area in no particular order and just filled the rows of seats as best we could. The picture above is my view for the Mass. The clergy seating area was on raised platforms about 10 feet higher than the floor of the sanctuary, where Pope Francis would preside at the Mass. Msgr. Stumpf and I were about 15 rows back in the section. We could see nothing but the backs of the priests and bishops in front of us. There was no possibility at all of seeing the altar or any part of the sanctuary where the Holy Father would be. And there were no screens positioned so that we could see the video feed, as virtually everyone on the Benjamin Franklin Parkway could. We were blind, in a sense, at least to what was going on at Mass. I suppose I was a little disappointed, but the longer we stayed there, and especially after Mass began, I was glad I had the perspective that I had been given. Here’s why …

While we could not see anything, we could hear fairly well – the words of Pope Francis, the lectors, the cantors, the priests around us. We were able to join in song and responses. Perhaps most importantly, we could hear the voice of the Holy Father – the voice of the Universal Shepherd of the Church, our earthly Shepherd, who calls us to follow not his own voice, but the voice of the one Good Shepherd, Jesus Christ. The sheep of God’s flock heard the voice of our shepherd, and just in hearing that voice, we are called to follow him to an encounter with God. I didn’t need to be able to see the altar or even the color of the Pope’s vestments in order to hear his voice.

But if you look again at the picture above, there is one thing that I could see very clearly throughout the Mass – the body of Jesus on the huge crucifix in the back of the sanctuary. I couldn’t see anything else of what was happening during Mass, but I could see Jesus on the cross – I fixed my eyes on him, and that was all I needed. I looked upon the one who was wounded and broken and killed for our sins, who rose from the dead to give us life, and who calls us to follow him and to lead others to him. In the end, any encounter with the Pope – as with any other Christian – must necessarily lead us to an encounter with Jesus Christ if it is authentic. I didn’t come to Philadelphia to see the Pope as much as to be inspired to a greater love of Jesus Christ by being in the presence of a great disciple and our Universal Shepherd. In case there had been any temptation to forget that, the visual was placed right in front of me. 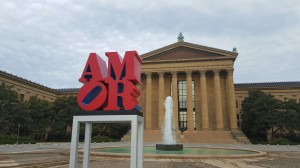 A companion piece to the famous LOVE sculpture in Philadelphia was erected before the World Meeting of Families. It’s on loan to the city and stands in front of the Philadelphia Museum of Art as AMOR – love in Latin and Spanish. It became clear this week – if it wasn’t before – that many, many people in this country love Pope Francis. And he loves Jesus and the Church and the poor and children and the elderly and prisoners and priests and religious sisters and brothers and families and those who don’t fit into any family. My hope and prayer is that our love for Pope Francis is more than infatuation or admiration for a man of holiness, humility, authenticity, and joy – but a deep and abiding love that compels us to do good for others and leads us closer to the One who is Love – God the Father, the Son, and the Holy Spirit.