Yesterday at Mass, I added some words to the Eucharistic Prayer. These words were not written in the Roman Missal, but I said them anyway. The most important prayer of the Mass, the Eucharistic Prayer is sacred – and we priests are not to add or change anything to the words as the Church has given them to us. But yesterday, I added five words – after recalling the memory of the Blessed Virgin Mary, I said – “with Blessed Joseph, her spouse.” It felt great!

Back in the 1960s, during the Second Vatican Council, Blessed Pope John XXIII added these same words to the Roman Canon – what we now know as Eucharistic Prayer I. It was the first time that anything significant had been added to or changed in the Mass in centuries. I recall looking at an old Roman Missal in which the invocation of St. Joseph had been written in at the bottom of the page so the priest could remember the addition. With the revision of the Roman Missal after Vatican II, there were several other Eucharistic Prayers added to the options a priest could use for Mass – but the required mention of St. Joseph remained only in the first of these prayers, the traditional Roman Canon. But now, following a decree that began under Pope Emeritus Benedict XVI and was approved by Pope Francis, the name of St. Joseph is to be added to the other three primary Eucharistic Prayers at every Mass – and in the Archdiocese of Indianapolis, that addition became effective yesterday following the directive of our Archbishop. It’s a great thing – I’ve often thought that St. Joseph gets less remembrance than he deserves, and his inclusion in the Eucharistic Prayer completes the daily remembrance of the Holy Family. But he is also such a great model for Christians today – a righteous man who trusted in God’s plan, even when it seemed beyond understanding, and who was content to stay in the background, letting the light fall on the foster-son he would raise along with Mary. In the recorded words of the Gospels, Joseph never speaks – but he is a strong and faithful witness to the in-breaking of God in the world and a humble servant of God’s will. 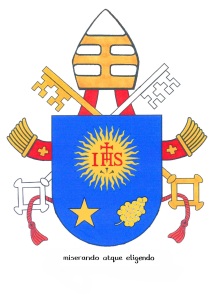 The coat of arms of Pope Francis includes three symbols – a sun with the IHS symbol, a cross, and three nails; a star; and a nard flower. The sun represents Jesus Christ. The star represents Mary. And the flower represents Joseph. They are arranged in a manner typical of the statues in many Catholic churches – with Mary on the left, Joseph on the right, and Jesus in the top center. The Holy Family is all there, but with a definite focus – both Mary and Joseph lead us to Jesus. Now, our invocations in the Eucharistic Prayer will do the same – as Jesus is made present in the Eucharist, we invoke the intercession of Mary and Joseph who lead us to the Son of God, the Son of Mary, the foster-son of Joseph, and the center of our families.

2 thoughts on “With Blessed Joseph, her spouse”